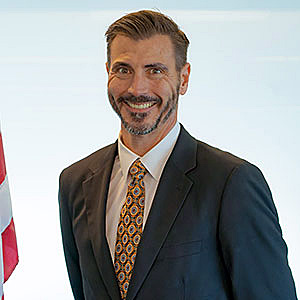 He was admitted to practice before the state courts of Virginia and North Carolina, the U.S. Court of Appeals for the Fourth Circuit, and the U.S. District Court for the Eastern and Western Districts of Virginia.

Prior to service for HRT, he was a commercial litigation partner at an American Lawyers Magazine law firm specializing in common carrier, mass transit, land use, eminent domain, construction, complex business, casualty, and high-volume defendant litigation.

Travers earned his Bachelor of Science in Biology with a concentration in Chemistry from Appalachian State University in 1999 and his Juris Doctorate from Wake Forest University School of Law in 2003.

He has been named one of Virginia Super Lawyers, Rising Star, five years in a row, and is AV rated by Martindale-Hubbell. Additionally, he is a 2012 graduate of LEAD Hampton Roads.