Transit Equity Day is a National Day of Action that commemorates the importance of investing in public transit for the benefit of all citizens. It also coincides with the birthday of civil rights icon and public transit rider Rosa Parks, which is on February 4.

“HRT is committed to treating all customers with dignity, and we do this by providing the best possible transit experience every day, to every person who boards. Equity also starts with providing clean bus shelters, better technology, and reliable bus service to each customer we serve. We remain vigilant in our work with stakeholders and funding partners to provide regional service that provides better reliability, faster commutes, and new connections.”
—William Harrell, President and CEO of HRT 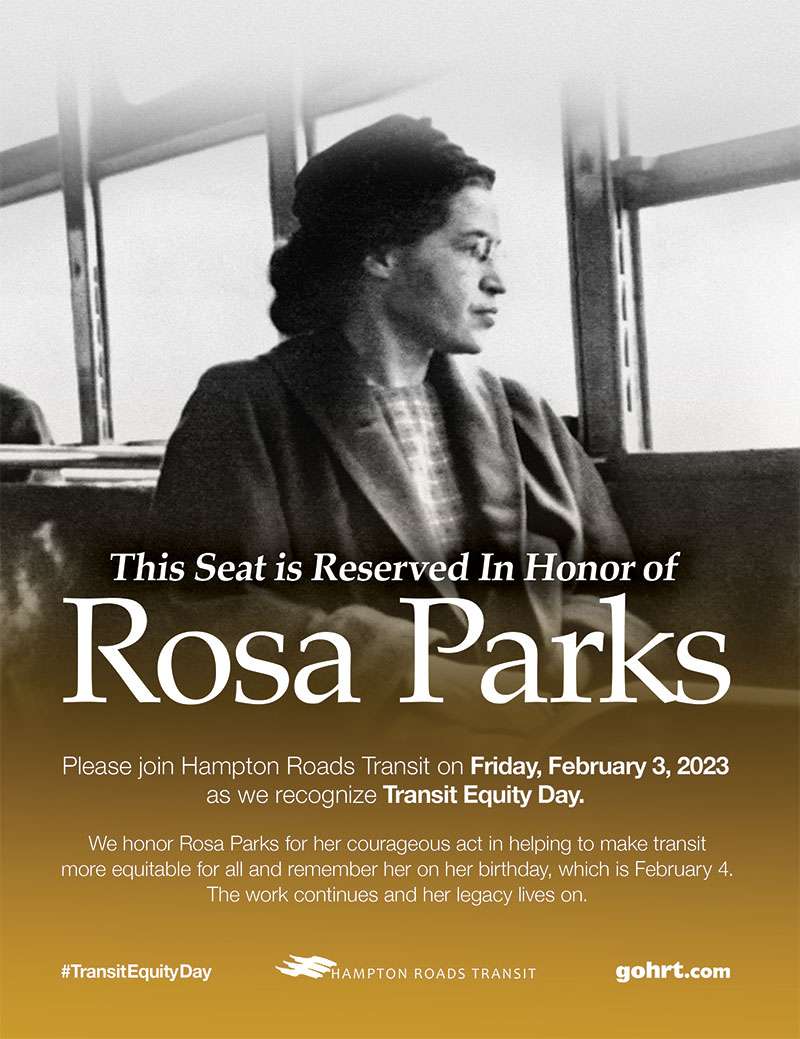 Bus headlights will remain on all day to symbolize the light Rosa Parks provided to our world and each bus will have a reserved front seat with notated signage, in honor of her courageous act in helping to make transit more equitable for all.

Parks is remembered for her pivotal role in the Montgomery, Alabama bus boycott of 1955 after she refused the order of a white driver to vacate her seat in the “colored” section of the bus once the “white” section was full. Parks’ act of civil disobedience to the Alabama segregation laws helped inspire the Black community in Montgomery to begin a boycott of bus services that lasted over a year.

Eventually, bus segregation was ruled unconstitutional in November 1956 under the Equal Protection Clause of the 14 Amendment to the U.S. Constitution.

Her act of defiance became an important symbol for the emerging Civil Rights movement then being led by the Rev. Dr. Martin Luther King Jr. As her legacy lives on, so do the legacies of the many Freedom Fighters who acted for justice.

When Parks’ memory is invoked, think also of Claudette Colvin, a Black 15-year-old who also lived in Montgomery and who also refused to give up her seat on the bus to a white woman on March 2, 1955. Claudette was dragged off the bus by police officers, handcuffed, and thrown in jail, for asserting her civil right to public transit.

Parks’ and Colvin’s right to travel on public transit was about more than just the seat. It was about the freedom to travel to work, school or play unconstrained by the biases of others. HRT stands in support of these concepts and embraces their memories as it works to provide public transit for all citizens.